HOW TO IDENTIFY, PREVENT, AND TREAT SOOTY MOLD TREE DISEASE 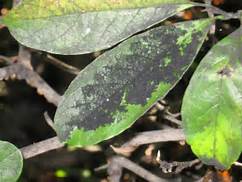 Written by Steve Nix and published on https://www.thoughtco.com/.

Are parts of your plants covered with black splotches or a dark coating? If so, it’s possible they are suffering from a condition called sooty mold. Sooty mold is the common name for several types of fungi that grow on the sweet secretions left behind by sap-sucking insects that feed on your plants. While these fungi do not infect the plants, they can cause damage by covering such large areas that they block sunlight from the leaves.This condition is usually an indication of an infestation from aphids, whiteflies, soft scale, leafhoppers, mealybugs, spotted lanternflies, and other insects with piercing mouthparts that feed on plant sap.

Sooty mold appropriately and exactly describes the disease, as it looks just like chimney soot. Ascomycete fungi, which includes many genera, commonly Cladosporium and Alternaria are usually the offending fungal organisms. Although unsightly, it seldom damages the tree but it can look nasty in the landscape.

The pathogens are dark fungi growing either on the “honeydew” excreted by sucking insects or on exuded sap material coming from leaves of certain trees. These sucking insects can include aphids and scale insects and sooty mold may occur on any tree but is most commonly seen on boxelder, elm, linden, and especially maple trees.

Honeydew is a sugary, sticky liquid secreted by sucking, piercing insects as they feed on plant sap. The insect feeds itself by using a special mouthpart that penetrates the soft tissues of plant foliage, soft stems and most particularly for aphids, the tender underside of leaves.

These soft-bodied insects produce the “honeydew” as a liquid waste product via the gut but will not harm your tree. It’s a real problem on everything beneath and around the tree that is exposed to the syrup and then colonized by sooty mold.

Sooty molds are associated with high temperatures and increased stress brought on by limited moisture. During drought, aphid populations and their honeydew production typically increase on foliage undergoing moisture stress. One prevention method for the mold is keeping plants and trees well-watered and controlling the soft-bodied insect population is very important.

Sooty molds can be indirectly controlled by reducing populations of sucking insects that excrete honeydew. Use the appropriate recommended chemicals that control aphids and other sucking insects.

The appropriate chemicals your trees need for these sucking insects might be applying horticultural oil during the dormant season followed by an insect growth regulator in the mid-summer.

Also, a good washing of infested tree’s foliage (if possible) can dilute the honeydew and wash off the mold. This alone may be all that is needed.