Why Did My Tree Suddenly Die: Reasons For Sudden Tree Death 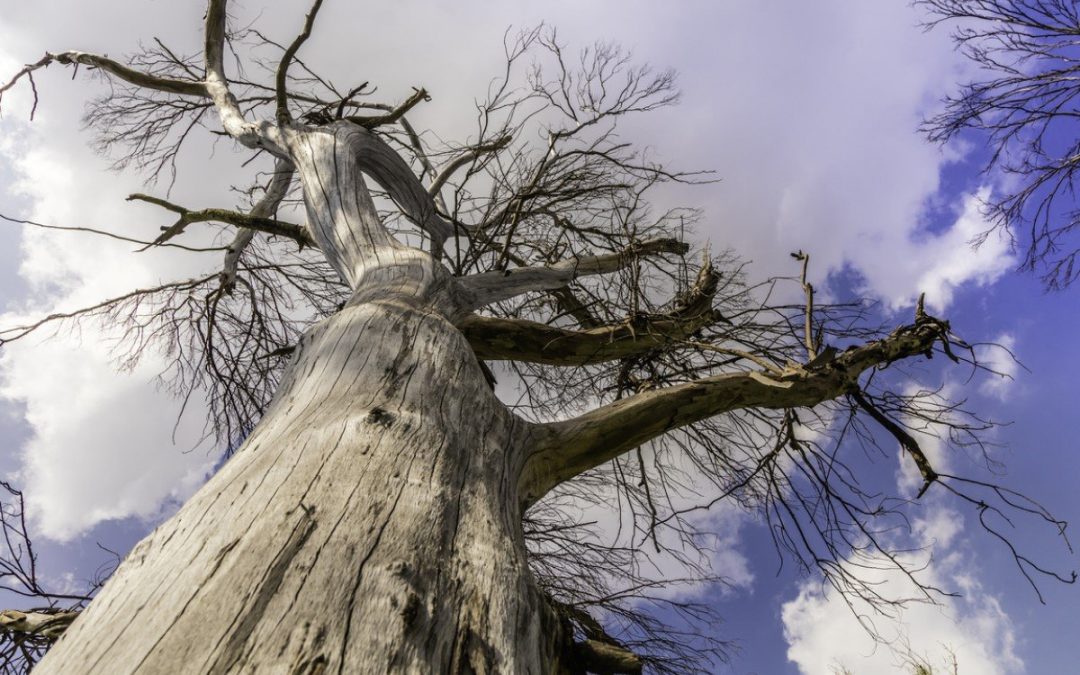 Written by Steve Nix and published on https://www.thoughtco.com/

You look out the window and find that your favorite tree is dead all of a sudden. It didn’t seem to have any problems, so you are asking: “Why did my tree suddenly die? Why is my tree dead?”. If this is your situation, read on for information on the reasons for sudden tree death.Trees, like any other living thing, are susceptible to diseases.  Some of the diseases encountered in trees are merely unsightly whereas others can reduce productivity or kill the tree. When the defenses against disease are compromised, the disease can gain a foothold in the tree resulting in infection and sometimes in tree death.

What Causes a Tree to Die?

5 Factors Cause the Death of a Tree

Trees have an extraordinary ability to withstand many damaging agents that are ever-present in their environment. Tree’s have evolved over millions of years to ward off many stressors that bite and burn and starve and rot their roots, trunk, limbs, and leaves. It is amazing how a tree compartmentalizes itself to seal off dead wood and disease, defoliates to reduce the effect of drought and bleeds to extract harmful insects.

We know that all trees do eventually die. There are many hundreds of seedlings and saplings that succumb for every mature tree left in the forest. All ages of trees eventually die to the same agents and only the most adaptive (and often lucky) individuals make it to old age.

Ground and site conditions on which a tree lives ultimately determines the environmental stressors placed on that tree. If a drought-sensitive tree lives on a dry site during drought conditions, it may indeed die from lack of water. But that same tree can also be more susceptible to every other life-threatening factor placed upon it. For example, a disease that appears to be killing the tree may in effect be only a secondary issue to the initial environmental problem.

Examples of adverse environments to trees are poorly draining soils, salty soils, droughty soils, air and ground pollution, extreme sun heating or cold spots and many, many others. It is particularly important to understand a tree species’ genetic tolerance to environmental conditions when planting. Many trees adapt very well to poor sites, but you need to understand which species fits where.

Virulent diseases like Dutch elm disease and the chestnut blight have caused sudden death to entire forests in North America. However, the most common diseases are more subtle in their work, killing many more trees in total than virulent types and cost forest and yard tree owners billions of dollars in forest product and specimen tree value.

These “common” diseases include three bad ones: Armillaria root rot, oak wilt, and anthracnose. These pathogens invade the tree through leaves, roots and bark wounds and damage a trees vascular system if not prevented or treated. In natural forests, prevention is the only economic option available and is a significant part of a forester’s silvicultural management plan.

Harmful insects are opportunistic and often invade trees under stress from environmental problems or disease. They not only can directly cause tree death but will spread harmful disease fungi from a host tree to surrounding trees. Insects can attack a tree’s cambial layer by boring for food and nesting cavities, or they can defoliate a tree to the point of death. Bad insects include pine beetles, the gypsy moth, and emerald ash borers.

A catastrophic event is always possible in a vast forest as well as in an urban setting. All property, including trees, are subject to being damaged or destroyed. In many cases, trees are not killed but are damaged to the point where their vigor is lost, and insects and disease take advantage of a tree’s loss of resistance.

Significant tree losses can occur during a forest fire or when exposed to tornado-strength winds. Trees take a terrible hit when heavy ice is deposited on species sensitive to limb weight which results in breakage. Floods that do not recede quickly can cause root oxygen levels to diminish to the point where tree damage can occur. Extraordinary drought makes quick work of moisture-loving tree species and can harm all trees when extended over a long period.

For trees who beat the odds and live through maturity to old age, there is a slow dying process that may take centuries to complete (in long-lived species). The modular tree compartmentalizes around damage and infected areas and continues to grow. Still, growth starts slowing after a tree matures, the ability of the plant to support itself diminishes and incurs the loss of adequate foliage for hydration and food.

New immature branches, called epicormic sprouts, try to assist in maintaining an old tree’s vigor but are weak and are insufficient to sustain life for very long. A mature tree slowly collapses under its weight and crumbles to become the nutrients and topsoil for future trees.

We’ll remind you that trees do die to the ax. Trees via their wood have supported humankind and civilization for millennia and continue to be a necessary part of the human condition. The practice of forestry through professional foresters work continually with much success to provide a sustained flow of available wood volume and at the same time, ensure a surplus of trees. Some consider deforestation a growing global crisis.